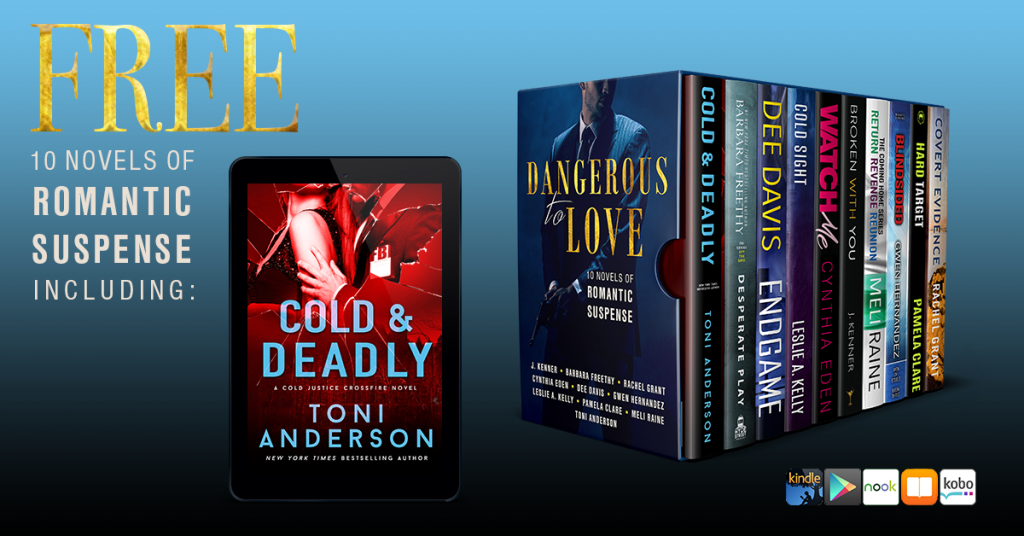 I’ve joined together with nine other bestselling, award-winning Romantic Suspense authors to give you a fantastic limited-time boxed set called Dangerous to Love. Grab it today!

Nearly a million words from some of the best-known authors in the genre. Individual books that would cost more than $50 to buy separately! Most titles have never been free before! For the next month you can snap them up from all your favorite vendors. Tell your friends!

ENDGAME by Dee Davis
FBI profiler Madison Harper and CIA undercover operative Gabriel Roarke go together like oil and water, but there’s no denying the physical attraction.  As they work together to track down a murderer, Madison finds herself in the killer’s sights—and she and Gabriel must trust their instincts to stay alive.

WATCH ME by Cynthia Eden
Watching gorgeous Gwen Hawthorne isn’t a hard job, but it’s certainly tempting. Chance Valentine has tried to keep his distance from Gwen for years, but when he’s hired to keep watch on her—as a twenty-four, seven bodyguard—Chance knows his control is about to be pushed to the limit.

Carrie comes home to a hot mess of unfinished business as she investigates her father’s murder and finds her old flame, local police officer Mark, is not what he seems…and yet she can’t stay away

BLINDSIDED by Gwen Hernandez
Framed for espionage, reformed hacker Valerie Sanchez goes on the run, unaware that former Marine sniper Scott Kramer is hot on her trail. But when Valerie becomes an assassin’s target, Scott questions his assignment, risking his life—and his heart—to keep her safe.

When a high-ranking US senator asks Cobra to protect his daughter, a midwife volunteering in Afghanistan, Derek’s gut tells him to turn the senator down. The last thing he wants to do is babysit an aid worker. But Jenna isn’t just another assignment. She’s also the younger sister of his best friend, the man who died taking bullets meant for him. There’s no way Derek can refuse.

COLD SIGHT by Leslie A. Kelly
Aidan McConnell reluctantly uses his psychic abilities to find the missing. Lexie Nolan is a small-town reporter on the trail of a serial killer. When more local teens go missing, Aidan and Lexie team up to save them. They must act fast because this sadistic killer doesn’t keep his victims alive for long…and time is running out.

DESPERATE PLAY by Barbara Freethy
Special Agent Wyatt Tanner thrives in the dark of the night. But living in the shadows can make a man forget who he really is. Can he trust the beautiful woman who needs his help? Or does she also have a secret life? He’ll make one desperate play to find out…

COVERT EVIDENCE by Rachel Grant
While traveling in Turkey, a mugging leaves a grad student without money or passport. Desperate, she turns to an enigmatic stranger for help. The CIA operator knows she’s a courier for a terrorist cell. Is the sexy archaeologist as unwitting as she appears to be, or is she a conspirator?

COLD & DEADLY by Toni Anderson
Rookie agent Ava Kanas knows her mentor’s death was foul play, but no one believes her except FBI negotiator Dominic Sheridan. Fighting a forbidden attraction, Dominic and Ava search for clues and discover a serial killer is targeting agents. Can they find the killer before the killer destroys them both?

BROKEN WITH YOU by J. Kenner

When his lost love, Eliza, begs for help finding her missing sister, Quincy Radcliffe knows that he’s the only man for the job. But helping her now means revealing his dark past to the one woman who can—and will—tear open his old wounds.