Cover Reveal for Colder Than Sin! 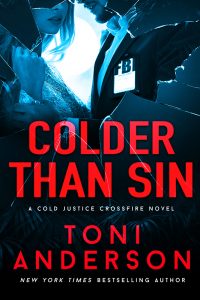 Here it is, finally, the cover for Colder Than Sin, which releases on October 22nd. What do you think? The amazing Regina Wamba created the cover.

Haley Cramer is co-owner of a private security firm and prides herself on her independence, but she is shaken to the core when gunmen attack a conference she is attending. She survives, but only because Quentin Savage pretends she’s his wife.

Together Savage and Haley plot their escape from a ragtag army of brutal but efficient thugs while struggling to figure out exactly who the enemy is. Why was the conference attacked, and why was Quentin a specific target?