I very excited that Apple Books has selected COLD SILENCE as one of the #BestBooks of June! Check it out HERE. 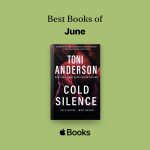 WHAT PEOPLE ARE SAYING… In this fast-paced romantic thriller, an FBI agent plays cat and mouse with a serial killer. Hostage Rescue Team member Shane Livingstone has been injured in the field at the worst possible moment, just as a sadistic murderer is on the loose. The killer’s using the dark web to orchestrate his crimes, so Shane is forced to partner with hacker Yael Brooks to take this psychopath down. The wild secrets that are uncovered by Shane and Yael’s investigation kept us hooked. We couldn’t put Cold Silence down until we’d discovered the truth about the murderer—and found out what happened between Shane and Yael, whose slow-burn romance is a great addition to the novel’s nonstop suspense, action, and creepiness. If you like intense reads, pick up Cold Silence.